July 2019
Transmanche Publications has issued a new edition of the Inland Waterways of North America map, covering the entire network of inland waterways throughout the USA and Canada.

This second edition includes historic and current navigable waterways. Ideal for users of inland water transport and scholars, ‘Great Loop’ cruise planning and exploring the routes and vestiges of the historic canals. The large folded map covers USA and Canada from Sioux City on the Missouri in the west to Maine and Quebec in the east, and from Lake Superior to southern Florida, with enlargements for the canals of New York State and Ontario, the C&O Canal, the Columbia-Snake Rivers, Nova Scotia, the navigable rivers in California and the Red River around Winnipeg. The map was first published in 2005.

The extract below shows the level of detail provided, unprecedented for an overview map. The extract shows the area around Olmsted Lock and Dam, currently under construction on the Ohio River, the first when heading upstream from the Mississippi River at Cairo, also showing the lower sections of the Tennessee and Cumberland Rivers. 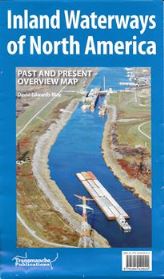 This map of North American Inland Waterways will assist the inland waterway user, educator, researcher, appreciator and bystander in pursuing their particular interests for years to come. The broad scope of this work combined with its great detail make it a most useful tool. (Thomas X. Grasso, Former President of Inland Waterways International and Past President of the Canal Society of New York State).

The C&O Canal Association assisted the creator, David Edwards-May, in preparing the C&O enlargement and by making an advance order for this new edition.