The C&O Canal Association and Visit Hagerstown hosted the World Canals Conference (WCC) from August 30 to September 2, 2021. Hagerstown was the ideal venue because of its proximity to the midpoint of the C&O Canal National Historical Park (NHP), which celebrated 50 years as a national historical park in 2021. This was the second WCC hosted by the Association. In 1992, the conference was held in Harpers Ferry, West Virginia.

Not surprisingly, COVID travel restrictions did affect attendance. With no international delegates, participants numbered about 100, which was roughly one-third to one-half the total expected when planning began a few years ago. Participants were masked up for conference-related events. 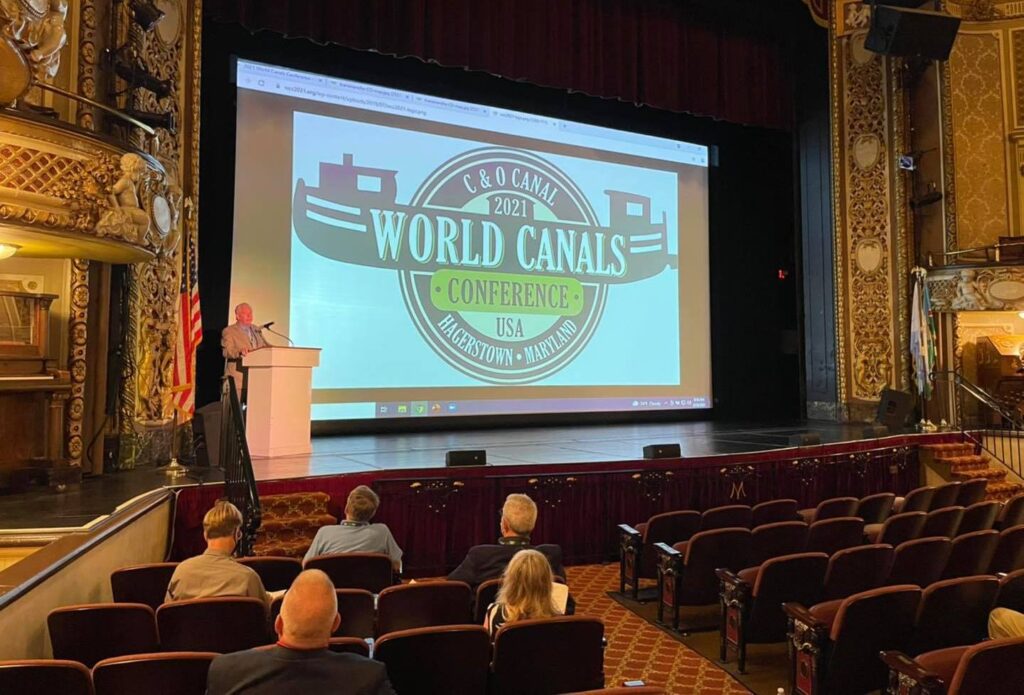 Tim Snyder headed the presentation committee, whose members rounded up 32 experts on everything from the mysteries surrounding an 1850s business ledger of a Williamsport merchant to the effects of climate change on waterways throughout the world. All presentations were in-person with the exception of Elke Witt from the tourism division of the UNESCO World Heritage Sites in eastern Germany. Her presentation was transmitted live from Germany and provided a brief overview of 400 years of reform movements in that country that led to today’s scenic waterways.

The real star of the show was the canal. About half of the breakout sessions featured the C&O Canal, focusing on its history, recreation, natural habitat, engineering, and tourism.

Afternoons were spent on or near the canal itself. Monday’s study tour took attendees over twisting roads to the Paw Paw Tunnel. Armed with tiny flashlights, the group made their way almost two-thirds of a mile through the welcome cool air. On the downstream side of the tunnel, NPS engineer Joe Reed discussed the ongoing work to manage rockfalls.

Tuesday featured a visit to the Monocacy Aqueduct for a picnic lunch and look at restoration projects in which the Association has been involved. Then it was on to Great Falls (Maryland side), where the attendees wandered on Olmsted Island, met the mules, and watched a canal boat put into dry dock ahead of a rainstorm. The rainstorm washed out Wednesday’s planned trip to Cushwa Basin, but a bus tour of Antietam National Battlefield went ahead as scheduled. Staff from the National Museum of Civil War Medicine in Frederick, Maryland, narrated the tour, adding fascinating detail about the medical history of the times.

Local vendors supplied a daily continental breakfast, boxed or catered lunches, a Sunday night welcome reception at the Ramada Inn, and two dinners. Monday night featured cookout fare at the Western Maryland Sportsmen’s Club, right on the canal. The Springfield Barn in Williamsport held the Wednesday night banquet, where about 150 attendees and guests listened to live bluegrass music, ate barbecue fare, and sampled the local wine and beer. Special guest John Frye was honored for his efforts in the creation of the C&O Canal National Historical Park. The conference ended late Thursday morning with the ceremonial hand-off of a model canal boat to the German representatives in preparation for the Leipzig event next year.