Level 27 is the level between the Antietam Aqueduct at Mile 69.36 and Lock 38 at Mile 72.80. The level has a little bit of everything – aqueduct construction, a canal-side community, a lock, Civil War history and easy access to two canal towns, with lodging and many amenities. It makes for a pleasant 3.4 mile one way or 6.8 mile round trip walk or ride any time of year but especially in the fall or winter. 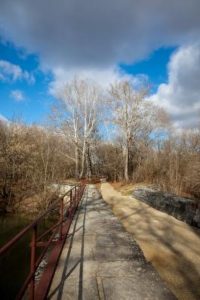 Getting to Level 27 is easy. The entire level is paralleled by Canal Road, which is just off of MD Route 34 before the Rumsey Bridge. The Rumsey Bridge crosses the Potomac and the canal at Lock 38. There is roadside parking three miles down Canal Road at the 20-site Antietam drive-in campground. The parking area is a short walk to the Antietam Aqueduct. Closer to Lock 38, there is a large parking area under the Norfolk Southern trestle near Shepherdstown, and a small parking area at Lock 38. One other way to access the level is to visit or stay in Shepherdstown, and walk across the Rumsey Bridge. A walkway ramp is provided to access the towpath from road level. Information about Shepherdstown’s amenities can be found on the Canal Towns web site. Sharpsburg is about 3 miles from Lock 38 and also offers many amenities. Information about Sharpsburg is also found on the Canal Towns site.

Walking on Level 27 one will encounter joggers from Shepherd College, dog walkers, through bikers and nature lovers. The area around Lock 38 is popular with fishermen, canoeists, kayakers, and the occasional sunbathers on the river edge. Rail fans will frequently catch a glimpse of a Norfolk Southern freight crossing the river. Civil War re-enactors have been known to walk the towpath. The Antietam campground is quite busy in the late spring through early fall with families and scout groups. 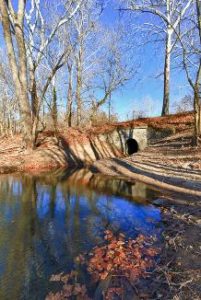 View of stream below Millers Sawmill

Canal features abound on the level. First encountered is the Antietam Aqueduct. This is the fourth canal aqueduct and is a three arch beauty. The 140 foot aqueduct was heavily damaged during the Civil War, but was rebuilt and appears as it did in the Canal operating era. The Aqueduct is best viewed from the towpath side by descending one of the paths to Antietam creek. Be careful, it is a bit steep in places. During the summer look for cliff swallows under the arches and water table stones. Proceeding up the towpath, Culvert 103 is crossed about a third of a mile past mile marker 70. This four foot culvert has a small stream flowing during all but the driest times. Access the culvert year-round by descending a path just downstream on the towpath side.

Next area is the Millers Sawmill community, which included a canal basin and was once an active site in the canal era. The prism is neatly mowed in this area. In the midst of Millers Sawmill is Culvert 104 at Mile 70.8. Fans of canal stonework will enjoy this culvert. It is accessed by a path just upstream, which is also a fishing access. Use this path to take a break along the river as well. The berm arch of Culvert 104 can also be viewed by crossing the prism; watch the Canal Road traffic. Following the towpath up to mile 71.25 one encounters another clear area with a pond and hilltop lodge across the berm. This is the Conococheague Sportsman Club, which was an overnight stop during the famed Douglas Hike.

At Mile 71.4 is an interpretive panel that marks Packhouse Ford. This is the site of the withdrawal of Confederate troops following the Battle of Antietam. Many pursuing Union troops were lost when they were ambushed by artillery on the Virginia side. This is a quiet spot to contemplate what happened in 1862. Culvert 105 at Mile 71.55 is a four foot culvert that is largely silted in. Only the keystone and upper ring stones are visible, and much of the year the culvert is brush covered. Cement kilns are visible across the berm at Mile 71.75 when the leaves are down; the kilns are located on private property.

One very interesting feature that is still visible is the Shepherdstown River Lock, at Mile 72.65. This lock allowed boats to cross the Potomac to load and unload at Shepherdstown. The lock is partially filled in and the crossover bridge is long gone, but one can view the stonework right down to the river. Ignore the graffiti that mars the stonework.

Lock 38 marks the end of the level. Lock 38 is a relatively low lift lock of around 5 feet; 8 was typical. The stone rubble on the lower end is the remains of a lock extension that allowed two boats to lock through at once. A rather interesting looking arch on the berm downstream side of the lock was a culvert that served as a bypass flume to allow water flow at all times. At one time an entire community existed around Lock 38 called Bridgeport. Find out more about Bridgeport by visiting the Ferry Hill Plantation on the hill overlooking Lock 38.

Level 27 is a bridge viewer’s delight. The New Rumsey Bridge was opened in 2004 and replaced the original Rumsey Bridge that was built after the 1936 flood. The original bridge was immediately downstream of the new bridge; no trace remains except the abutments on either end. The low stone piers visible in the river are from the old highway bridge that served in various forms until it was washed away in the 1936 flood. The abutments for this bridge are seen at the lower end of Lock 38. The tall piers are from the old Shenandoah Valley Railroad Bridge built in 1880 and dismantled in 1909. The piers were built on timber frames and are leaning a bit. It was replaced by the current Norfolk Southern Bridge that was built in 1908.

This area is a very popular destination on the canal. From a Level Walker’s view, popularity often means trash. In this case the level is generally relatively clean. Most trash is from short distance visitors in the Lock 38 area (the nearby convenience stores do a big business apparently), fishing at Antietam, and roadside trash from Canal Road near Antietam. Volunteer camp hosts keep the Antietam camp ground quite clean. The level also has its fair share of tree debris to pick up and low hanging branches to trim. One interesting bit of info, and a great legacy for the level, is that the original Level Walker for Level 27 was long-time Association member, past-president and canal supporter Ken Rollins. 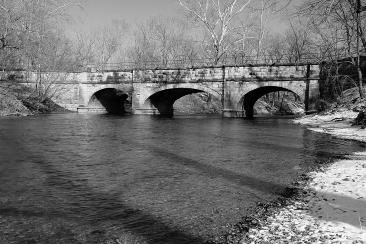 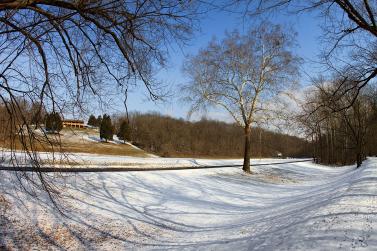 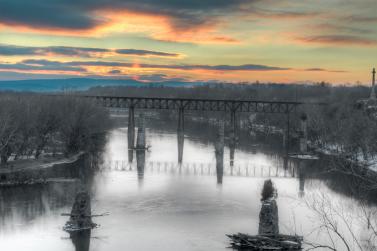 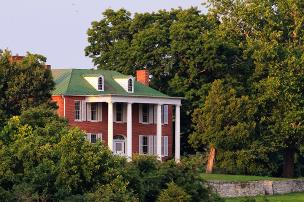