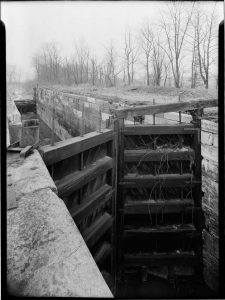 The lock keeper at Lock 75, the first outside Cumberland, kept a registry of boats passing. This record allowed auditors to check the tolls assessed by the official Collector in Cumberland. Unlike other locks, literacy was a requirement of the lock keeper’s job at Lock 75. In the March 1873 payroll records, the keeper of “Way Bill Lock 75” was paid $10 more than the keepers of other nearby locks.

If you examine the register, you will notice that most descending boats are loaded with cargo, while the ascending boats are usually empty. You can also see that boats passed at all times of the day and night. Records from two years are available:

Register of Boats Passing Outlet Lock, May 1875 – We have this record of all boats passing through the Outlet Lock (also known as Tidelock) in Georgetown during May 1875. This document is a good companion to the Lock 75 registers upstream near Cumberland. If a boat appears in both lists, you get an idea on how long it took to travel the length of the canal. May 1875 is the only month for which we have this Outlet Lock record. We don’t know why this register was kept.