Level 51, Dam #6, is repeating the 19th-century history of the canal. Traffic is abandoning the towpath in favor of the adjacent railway (trail). But these developments can actually enhance the experience of a 21st-century visitor.

Level 51 runs from Dam #6 at mile 134.06 to Sideling Hill Creek Aqueduct at mile 136.56. The parallel Western Maryland Rail Trail opened in 2004. On a nice weekend day, you can stroll in solitude along the towpath, while watching dozens of bicyclists whiz past on the rail trail.

During construction of the canal, Level 51 marked the beginning of the challenging final 50 miles. Dam #6 was completed in 1839. The canal company struggled for 11 years to finish the final stretch to Cumberland.

From 1839 to 1850, Dam #6 was head of navigation for the canal. An arrangement with the Baltimore & Ohio Railroad allowed coal to travel by rail from Cumberland to the opposite shore and transferred to boats which crossed the river and entered the canal at Guard Lock #6.

During the operating days of the canal, Level 51 marked the boundary between the Antietam Division and the Cumberland Division. 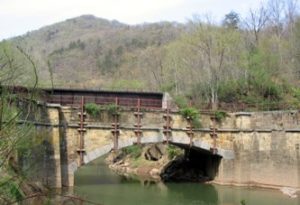 The best place to start your visit to Level 51 is the Western Maryland Rail Trail parking lot at Pearre. Use exit 77 off Interstate 68 to reach Woodmont Road. Follow Woodmont Road for 6.3 miles to its end. Turn right on Pearre Road and follow it for one mile to the WMRT Pearre lot, which has 40-plus parking spaces. See Google map.

Completed in 1848, Sideling Hill Creek Aqueduct consists of a single arch with a 60-foot clear opening. The berm side parapet wall has collapsed. Steel braces help support the towpath side parapet wall. 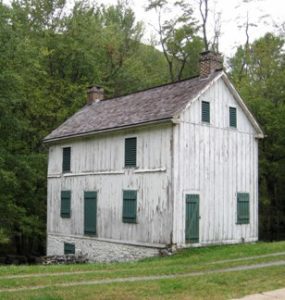 Glance up at Sideling Hill mountain. It represented a threat to the canal in the 1950s. Road builders wanted to pave over the canal bed, so they could avoid the 1,760-foot-high mountain. Many years later, the builders of Interstate 68 had to excavate a 340-foot deep notch in Sideling Hill ridge 5 miles north of here.

Retrace your steps back to Lock 56. It was originally built from soft grey limestone. Sometime after 1880 the upper half of the towpath side wall was removed and replaced with concrete. Some of the original stones were piled on the river side of the towpath, where they remain. Notice the two-and-a-half-story wooden lockhouse. It was built between 1838 and 1850. George Apple received a monthly salary of $50 as keeper of the lock in 1875.

Continue downstream along the towpath. In the next mile or so, you will walk over four culverts: 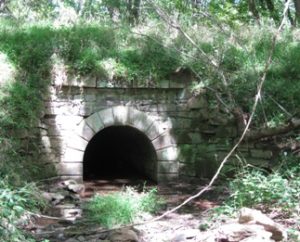 At mile 134.62, you can see a fork in the berm road, which leads uphill to the former Woodmont Rod and Gun Club. Situated on 3,400 acres, this private club operated from 1870 to 1995. Over the years, guests included Presidents James Garfield, Chester Arthur, Benjamin Harrison, Herbert Hoover, and Franklin Roosevelt. The club hosted Justice Douglas and his companions on the second night of their famous 1954 hike. Today, the Maryland Department of Natural Resources owns the grounds, but the property is managed by the Izaak Walton League.

The next landmark is the sagging bridge over the mouth of Long Hollow at mile 134.23. Here the stream flowed directly into the canal during its operating days. Water backed up the hollow, creating Polly Pond which became a turning basin for canal boats. The masonry spillway just upstream from the present bridge on the towpath helped discharge the overflow. 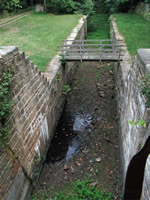 At the end of Level 51, you will find three structures: Dam #6, Guard Lock #6, and Lock 55. Dam #6 was a 475-foot-long wooden structure, filled with loose rocks. After the canal closed, a fire in 1936 and floods in 1936 and 1942 reduced the dam to rubble. The surviving concrete abutments are still impressive. Guard Lock #6 adjoins the dam abutment.

Payroll records from 1875 show Henry Gay received a monthly salary of $75 as the keeper for both Lock 55 and nearby Lock 54. Interestingly records show that both locks had lockhouses. Only the foundations remain.

To return to the parking lot, I like to use the WMRT. A path takes you uphill from Lock 56 to the WMRT. The bike path provides a nice view of the towpath. There are a few wayside exhibits along the way.

Today’s bike path follows the right-of-way of the Western Maryland Railway. The WM built its extension from Big Pool to Cumberland between 1903 and 1906. The extension required construction of six bridges across the Potomac and three tunnels. Undoubtedly WM management coveted the C&O Canal’s water-level route to Cumberland. They could have drained the canal, laid tracks on the right-of-way, and avoided constructing new bridges and tunnels. However, the B&O controlled the canal during this time period and wouldn’t have been interested in making life easier for a competitor. The WM was acquired by the B&O in 1968. They abandoned most of the WM Cumberland extension in 1975.

The Maryland Department of Natural Resources purchased the WM right-of-way between Big Pool and Pearre in 1990 and opened the bike trail in sections between 1998 and 2004. C&O Canal National Historical Park owns the abandoned right-of-way between Pearre and North Branch, outside Cumberland. Park officials plan to work with the state of Maryland to extend the WMRT from Pearre to the West Virginia border, which would allow bikers to get a scenic view of the Potomac River from the bridge between Little Orleans, MD and Doe Gully, WV. 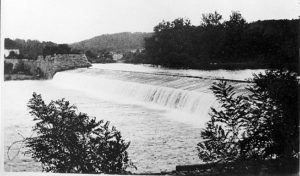 Historical image of Dam No. 6 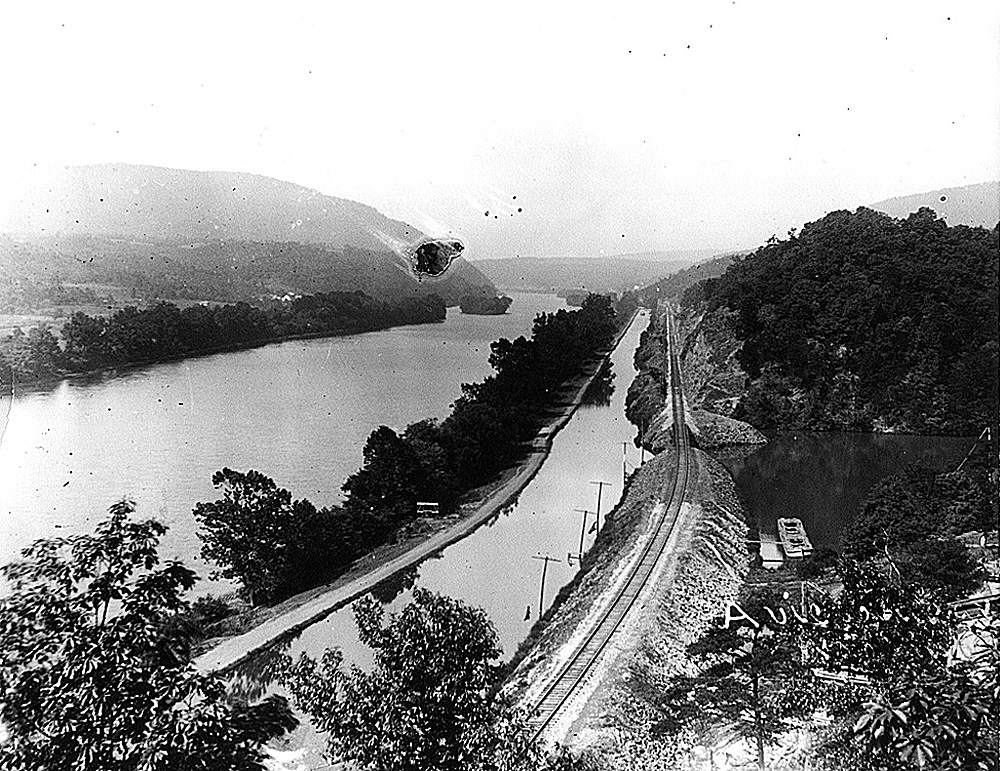 View of Level 51 near Long Hollow from the early part of the 20th Century.
Western Maryland Regional Library – www.whilbr.org