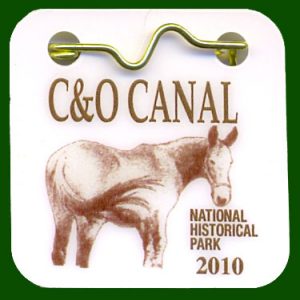 The idea of towpath pins originated with our sister organization, the Cuyahoga Valley Association (CVA). This volunteer organization, like ours, is a friend and partner of a national park, namely, the Cuyahoga Valley National Recreation Area. The towpath pin was a way to invite friends and users of the towpath to support the C&O Canal National Historical Park and its ongoing program of canal restoration projects. The towpath pin depicted a familiar canal feature or scene and was designed to be pinned to jacket, shirt or hat.

The pin was awarded as a token of appreciation to anyone who contributed five dollars (or more) to the C&O Canal NHP. All contributions went directly and fully to canal restoration work. Each towpath pin was pinned to a card which thanked the contributor and cordially invited him or her to consider joining the C&O Canal Association. The towpath pins were available at NPS Visitor Centers along the canal, from the Association, and at various canal events and Association activities. 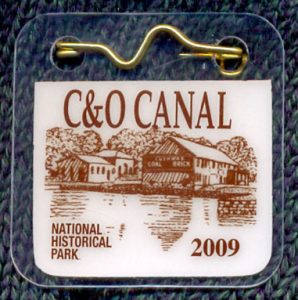 Towpath pins were issued annually from 2002 thru 2010.  The various scenes were:

Association financial records were not available for all the years, but costs associated with this project amount to $7,245.29.